A brief history and biography of life so far 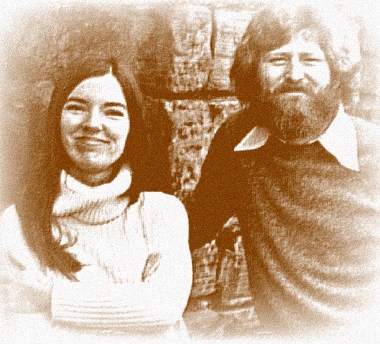 Ingrid was singing and running her own folk club in Killingworth village, just outside Newcastle upon Tyne, along with her sister Yvonne and brother-in-law Alan, way back in the mid 1960s. Every Sunday night at the Killingworth Arms, it was a very popular club and if you didn’t get there by 7 o’clock, you didn’t get in, because it was already full ...those were the good old days!

Barrie started singing and playing guitar, when he met Ingrid in 1969. They both sang regularly at many of the folk clubs in and around the North East for a couple of years. Barrie then decided he needed guitar lessons, so along came his guitar teacher, our dear friend Colin Pearson, a lovely man and a superb musician (something Barrie wasn’t!) and we all teamed up to form the vocal harmony group LEGEND in 1971.

Legend then became resident at Cramlington folk club in 1972. A very prestigious folk club in the area and it was also the first time that we met Tom McConville who was also resident there, playing with the Irish band Lammas Tide. Our residency lasted almost 10 years, in which time Legend produced their first recording and also built up a good local reputation, "guesting" at probably every folk club in the North East at that time.

1980 saw the emergence of Barrie now playing concertina as well as guitar in the Klondyke ceilidh band. This was a multi-talented Irish-music band, a very well respected outfit playing full time for about 8 years in the North East and abroad.

Legend due to Colin’s family commitments disbanded in 1984 and Barrie & Ingrid then launched their duo singing career which has lasted till the present day!

They have in recent years performed at many clubs and national folk festivals, not only singing but also presenting workshops on harmony singing, "Geordie" songs and songwriters and also an historically accurate presentation called "King of the River" about the life and times of the Keelmen on the river Tyne.

Both Barrie & Ingrid have been involved with other singers and musicians and were involved for a short time, in the maritime scene (1998-2000) both in the UK and in Europe as part of the harmony group "Salt of the Earth".

Barrie’s song writing began in 1971 and he is still writing songs in the traditional style today. His songs are as strong and poignant as they ever were and he prefers to write about "factual" events and tries to tell the stories from an often not so obvious perspective. His songs are now being sung by lots of people on the folk scene, for which he is much appreciative, if not a little humbled.

Almost 40 years! It has been quite a "folkfest" up to now and hopefully it will continue. Their singing gives them lots of pleasure and takes them all over the country and abroad. Their performances are not only strong in content of material as well as close harmonies, but they also like their audiences to have a "good time" as well. Barrie’s humorous / cheeky anecdotes on life and living with Ingrid are well known!